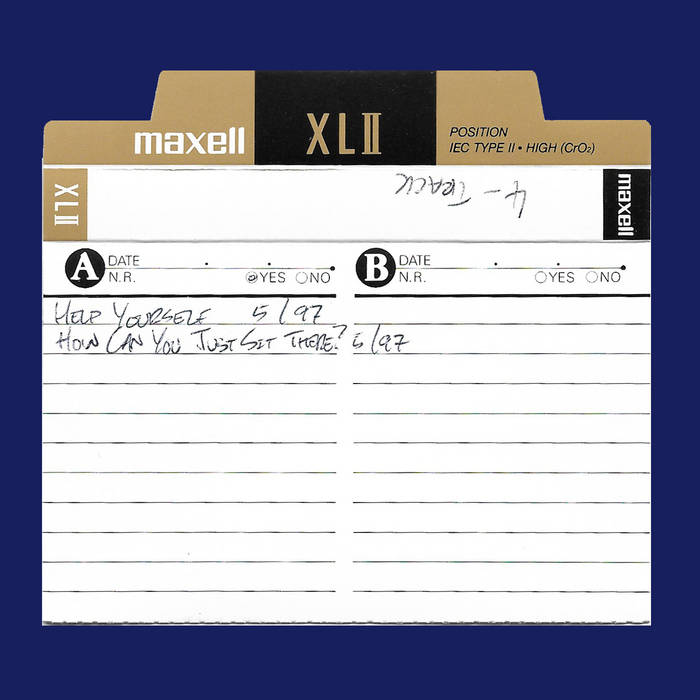 This is a new mix of a 4-track cassette recording that Stephen made in Denver in 1997 with his bandmate of the time, George Wilson. Stephen plays guitar and drums, and does the vocal. George is on bass.

Stephen sent a rough mix of this to a friend, music critic Brian Keizer, shortly after recording it. Brian wrote for SPIN magazine and the San Francisco Bay Guardian, and later was on the nominating committee for the Rock n' Roll Hall of Fame for several years. Here is some of what Brian had to say about the song:

"'Help Yourself' opens with a downshift of turnarounds... You keep waiting for the words to this epic but they don't come... And then the voice is there. It's like a dolphin leaping free of the ocean. 'Shoot your breath into the air/It's so cold outside you can see it hanging there.' We are in the loping sprawl and the summery lassitude has already been cut by those lines. 'You are heavier in the water/You are safer at the shallow end.' And there comes the summer pool largesse rising to the center of the mix. It's a song of all seasons it seems, but one thing is certain, whoever he's singing to isn't going to get the verses to line-read and ponder. All the main action of life is in the unsaid riddle, the space between the body and mind in nature. And the turnaround is back throwing the whole proceedings back on themselves... It's teasing and purposeful and you lean in for the next verse... It's almost maddening how the song structure keeps you hanging on; and then the voice rises again. 'I don't wanna ride in the middle front seat/I wanna stretch out in back with the big kids.' The sudden immediacy of the lines and the first person unveiling is breathtaking then the reedy voice shrieks in childish plaint and lucid want. 'I don't wanna be the Princess/ I wanna be the dragon/ I wanna get the fuck out of this goddam station wagon.'

"... 'Help Yourself,' that fever dream of the American family locked in the station wagon, the organic way it rises out of the song, the voice: it stands with Nirvana's 'Sliver' and a load of Michael Stipe vocalisms and lyrics as the most evocative generational recall for me (I mean the way a photo sums up a whole time of shared isolation for one and a shared process that is grade school and high school) of the whole sibling drama that is center stage as the extended family of time past dead ended into the nuclear family of modern day, the 2 and a half kid era rising out of the madeleine.

"Then the final verse kicks in... the voice rises again and it's back to that address of the first verse. 'So there is a script written for your life/written by a thousand monkeys who can type.' There's a coppery taste of misanthropy in the air, the early seasons of youth, the eternal days in the sun and cold gone, the vision of that girl you feel he's addressing grown and onto new things and that hint of circular sarcasm is now just the bitterness of divided creation. And the singer leans in with a joyless bitter summation of the story for all of us. 'It's pretty good right up until the end/the last twenty pages are really weird, they don't make any sense.' And the downstroke that began the song erupts and lets us into the epic sprawl again. Endlessly it seems you wait for more words. There are none. It stays open and nagging. It doesn't post a reclamation against the tenets of life. It just follows its form out and ends.

"It's the kind of unpredictable artistic engagement I had leaned into the speaker and listened for on [Stephen's] first four track demos and it still staggers me to hear it now, as many times as I've traced its form. It's a real song. And if he did nothing else I would tell whoever would listen, this is a big something as songs go. You can't ignore someone who can make a song like this; you have to follow the story out to the end."

We attempted to record this song two more times after Stephen relocated the band to California, once on a self-titled EP when the band was still called Wash, and again on our 2005 album Hotter Heads Prevail. But in hindsight, this 4-track version, which inspired Brian's words, captures the feeling best.

Brian passed away in March of 2020. We're releasing this version now in tribute to Stephen's dear friend. His entire essay can be found here:

why did the divinely inspired man cross the road?
because the sign said "walk"

so there is a script written for your life
written by a thousand monkeys who can type
it's pretty good right up until the end
the last twenty pages are really weird, they don't make any sense

Recorded on 4-track in Denver, CO practice space, May 1997
Mixed in July 2020 by Ben Adrian of Feedbackloop