The Revenge of Two​-​Gun Pete 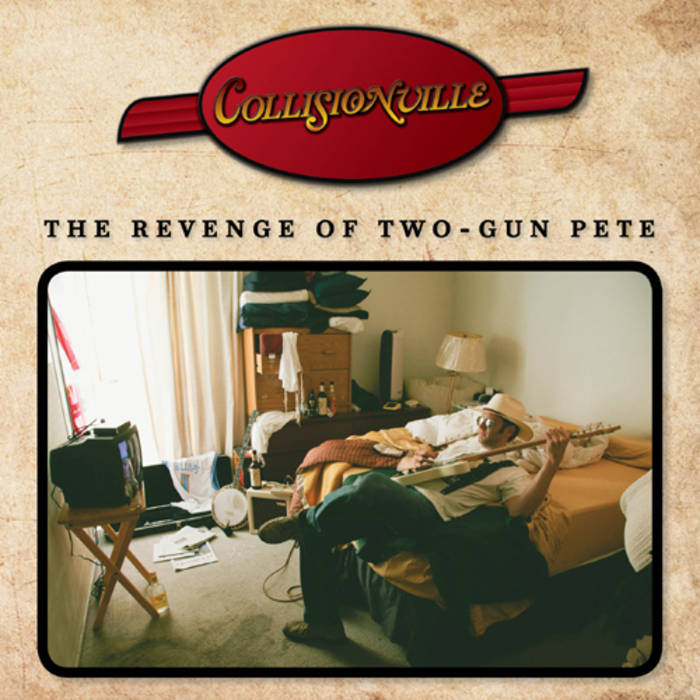 “Hank Williams lived in a rented shack that was near the imposing home of Herman Pride and his family, who did not let young Hank forget that he was poor and fatherless. They called him ‘Two-Gun Pete’ because he liked to play with toy pistols. He didn’t like the ‘Pete’ part and would never forget Herman Pride and the humiliation that he felt was visited upon him.” -Chet Flippo, Your Cheatin’ Heart: A Biography of Hank Williams

More than 80 years later, a descendant of that same Herman Pride feels the ghost of Hank Williams taking revenge. Led by guitar player and singer Stephen Pride, Collisionville’s new album The Revenge of Two-Gun Pete is haunted by the angry spirit of Hank Williams laying his cold hand on Pride and his family. The album opener, “The Ballad of Herman P. Willis,” retells the story of the curse, and the other 9 songs carry through the eerie feeling of Hank Williams still getting even for the Pride family’s crimes against him.

Revenge is the band’s third album, completing the transformation that began with 2009’s I Spied a Spider. Gone are the post-punk stylings of 2005’s Hotter Heads Prevail, the band now fully embracing country and blues influences. It’s audible as the album picks up, with the Chess Records bottleneck of “The Devil Can’t Hurt You if You Don’t Believe,” the adrenalized country rock of “No Way to Live,” and “Try It on Your Horses,” which closes out the side with manic drum fills, fuzzed-out bass, and dirty, amplified harmonica.

Side Two is acoustic, opening with the plectrum banjo of “I Still Haven’t Seen the Light” (an answer to Hank’s “I Saw the Light”?), which features Jeanie Schroder from DeVotchKa on upright bass. These tunes also see the band adding more instruments to their repertoire: Pride’s pedal steel guitar lick opening “Dancing with a Broken Heart,” bassist Conor Thompson’s upright on the same (and a few other songs), and drummer Ben Adrian’s ukulele flourishes on “These Are Not the Words,” to name a few.

The moody second act closes with title track “The Revenge of Two-Gun Pete,” a reprise of the album opener played on banjo, acoustic guitar, and upright bass, with Hank’s ghost calling out the curse again through the window of that goddamned Cadillac. Make no mistake: Two-Gun Pete holds a vicious grudge.

Cover photographs of Stephen and Conor by Kirsten Lindquist Campana. Cover photo of Ben by Emily Hutcheson. Photos on this page by Scott Evans. Graphics layout by Digital Ink.

Stephen dedicates this album to Shifra, B. & Z., and William Pride